People constantly ask me “Where do you get your writing inspiration?” I’ve answered the question so many times, and I’m beginning to realize I’ve been inspired by maybe a hundred different things. The standard answer is usually the Robert B. Parker-Raymond Chandler-John D. MacDonald triumvirate, which of course comes first.

But there are so many others.

When I first saw the movie in the theater, I was on a bad date. She was bored out of her mind and it forever tainted my appreciation of this very slow burn movie.

Fast forward twenty years. I watched it again and then read the novel Rum Punch by Elmore Leonard, on which it was based. I immediately fell in love with both.

You know I get a lot of complaints about profanity. Blame Elmore Leonard and Quentin Tarantino. Both have a knack of getting the vernacular of lowlifes correct, colorful metaphors included. Besides, if you’re going to write about lowlifes, that’s how they talk. (It’s also how my subconscious mind talks. Hm, maybe I ought to see a therapist about that.)

The novel Rum Punch is smoother, but Jackie Brown is a dialogue lover’s dream full of deep characters and a humming tension carried by the intense presence of Pam Grier (who also played Ricardo Tubbs’ main love interest in Miami Vice. Ah, bet you forgot that, didn’t you?)

Not only did Jackie Brown taint my ways with the English language, it gave me Luther. Winston, the partner of Max Cherry, was played by wrestler Tommy Lister. When I saw him, the Reverend Williams was born.

The two million in the duffel bag in Miami Burn? Yep, I think subconsciously Jackie Brown is where I got that, too. (Although there at least a thousand movies with two million dollars in a duffel bag.)

However, I do agree with Pam Grier in the article linked below. The ending she suggested would have been better. Still, this movie gets a fresh watch from me every once in a while. Samuel L. Jackson is brilliant, as always. Robert DeNiro delivers his most subtle performance ever, and Robert Forster’s loneliness oozes from him in every frame.

‘Jackie Brown’ at 20: Pam Grier Has a Better Idea for an Ending

About the Author: John D. Patten 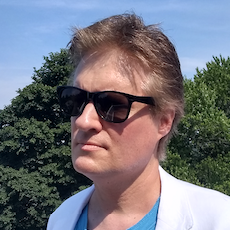 John D. Patten occasionally skipped class because he was glued to a Spenser mystery by Robert B. Parker. He would be late for jobs because he got caught up in a Travis McGee adventure by John D. MacDonald.